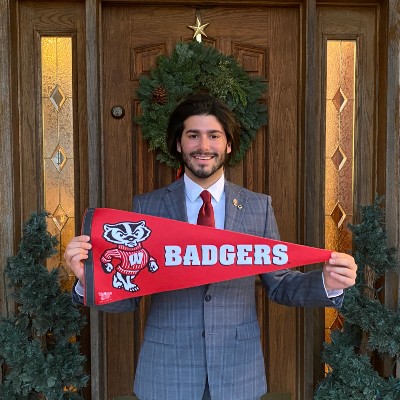 Where are you from, and what brought you to UW–Madison?

I was born in Madison, but have lived in Janesville, Wisconsin, my entire life. Growing up, I worked with my father and uncle at our family owned restaurant here in Madison: The Mediterranean Hookah Lounge and Cafe. I fell in love with the city at a very young age, and always wanted to attend college here. Mom and Dad, if you are reading this — thank you. Without your hard work and moral values as a constant example, I would not be who I am or where I am today.

How did you choose your major?

I was accepted to UW–Madison as a declared biology major, planning to follow the pre-med track. I left SOAR as a declared theatre major, a really fast change! While this was a significantly different path than I had in mind, I knew that I wanted to study something that I had a passion for. With the help of my academic advisers, I quickly made the decision to major in theatre and drama while still planning to take pre-medicine classes. Later in my academic career, it became clear that I was focusing more on my acting classes than my biology labs. I then made the decision to make acting my main course of study. Rather than completely stopping my education within the sciences, I pivoted to the certificate in global health and began the certificate in entrepreneurship as well. I will graduate with a BS in theatre and drama as an acting specialist and will hold both of these certificates as well.

What was your most meaningful experience at UW–Madison?

During most of my academic career I was a member of Fundamentally Sound, an all-male identifying, a cappella group on campus. One of the coolest attributes of the group is that we record and release albums! As we were prepping to release our most current album, one of our favorite songs was generating a lot of attention. So, we decided to make a music video for it. I got the opportunity to help direct and choreograph the video, allowing me to put my acquired theatre skills into action, all while having the best of times with some of my closest friends. The “Acappella 101” music video can be found on Fundamentally Sound’s Facebook and YouTube pages respectively. Our new album, “imbroglio,” released November 13, 2020, on all streaming platforms.

What class or professor had the greatest impact on you, and why?

Most of my professors positively affected my academic path. If I had to narrow it down, I would say Colleen Conroy and Jim Stauffer (both within the Department of Theatre and Drama) helped me grow my passion for theatre and acting the most. During several of their classes, they instilled in us a sense of confidence and proficiency as they prepared us to enter a professional theatre setting. Whether it was Colleen’s voice training classes or Jim’s auditioning coursework, I always felt that I was being prepared to start my career with the right tools in hand.

What advice would you give to incoming students?

My best advice is: Don’t be afraid to try new things. I know it may sound a bit cliché, but as you grow and mature, the worst thing you can do is put yourself in a box and never take risks or give new opportunities a try. Always be willing to try something new, whether it’s a free pottery session at the Union, a class that your friend recommended, or even a new place to eat on State Street. “We keep moving forward, opening new doors, and doing new things, because we’re curious and curiosity keeps leading us down new paths.” — Walt Disney

You’re a UW–Madison expert now, so we must ask: Which is the best Babcock ice cream flavor?

I am a sucker for chocolate peanut butter. And when I found out I could add marshmallows … OH, BOY!

"Don’t be afraid to try new things. I know it may sound a bit cliché, but as you grow and mature, the worst thing you can do is put yourself in a box and never take risks or give new opportunities a try."