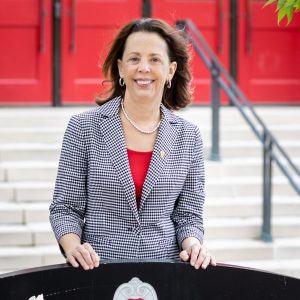 Under Hess’ leadership, the School has experienced notable growth, including the development of two new undergraduate majors and several popular certificate programs that span the arts, education, and health. The School has also established new initiatives focused on strengthening and expanding its efforts around teacher education, diversity and inclusion, global engagement, professional learning, and community partnerships. Investment in new research centers and a new Grand Challenges program to jumpstart  innovative and interdisciplinary research across the School has advanced our research mission. Hess has also spearheaded efforts to increase graduate student support.

At UW–Madison, Hess is the principal investigator of The Discussion Project, a professional development program that aims to strengthen campuswide capacity to create welcoming, engaging, and academically rigorous classroom environments in which students experience productive classroom discussions on important issues and topics. In 2019, the Mellon Foundation awarded The Discussion Project a $1 million grant to increase the number of cohorts at UW–Madison, expand to other schools, and undergo an in-depth study.

Hess first arrived on campus in 1999, joining the School’s highly ranked Department of Curriculum and Instruction as an assistant professor. She became an associate professor in 2005 and a full professor in 2009. In 2011 she took a leave from the university to serve as senior vice president of the Spencer Foundation in Chicago. The organization funds research to improve education policy and practice. Hess today also holds the Karen A. Falk Distinguished Chair of Education. She was elected to the National Academy of Education in 2019.

Since 1997, Hess has been researching how teachers engage their students in discussions of highly controversial political and constitutional issues, and what impact this approach to civic education has on what young people learn. Her first book on this topic, “Controversy in the Classroom: The Democratic Power of Discussion,” won the National Council for the Social Studies’ Exemplary Research Award in 2009. Her most recent book, “The Political Classroom: Evidence and Ethics in Democratic Education,” co-authored with Paula McAvoy, won the American Educational Research Association’s Outstanding Book Award in 2016 and the prestigious Grawemeyer Award in 2017. Also in 2017, Hess was recognized by the National Council for the Social Studies with the Grambs Distinguished Career Award for Research.

Hess is deeply committed to working with teachers to improve the quality of democratic education in schools. In September 2018, for example, Hess and the School of Education hosted a day-long event leading up to the November midterm elections titled, “Teaching About the 2018 Elections: Preparing Students for Political Engagement.”

Hess began her education career as a high school social studies teacher in Downers Grove, Illinois, in 1979. During her time there, she became president of the Downers Grove teachers’ union. She then went on to work as the associate director of the Constitutional Rights Foundation Chicago from 1987 to 1995.