“Johnny’s Pheasant,” written by Cheryl Minnema and Illustrated by Julie Flett, is the winner of the 23rd annual Charlotte Zolotow Award for outstanding writing in a picture book.

The book was edited by Erik Anderson and published in 2019 by the University of Minnesota Press. 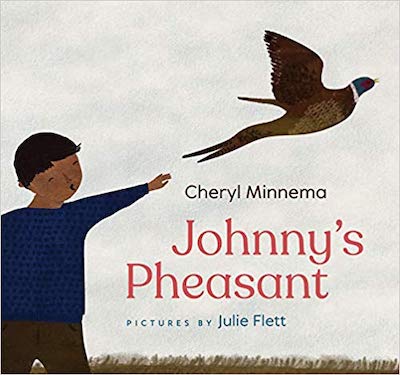 The award is given by the Cooperative Children’s Book Center (CCBC), a library of the UW–Madison School of Education.

This gorgeous, graceful story about a Native family, written by an Ojibwe author and illustrated by a Cree-Métis artist, centers on small moments of surprise. When Johnny urges his grandma to pull over for a “small feathery hump” near the ditch, they discover it’s a pheasant. Johnny’s certain it’s sleeping, while his grandma believes it was hit by a car. With a “Hoot! Hoot!” from both boy and bird, this perfectly-paced narrative offers humor, wonder, warmth, and a child-centered sensibility.

The 2020 Zolotow Award committee named five honor Books: “Fry Bread: A Native American Family Story,” written by Kevin Noble Maillard and illustrated by Juana Martinez-Neal, appeals to the senses while celebrating complex cultural concepts centering on a food of many Native tribal nations; “A Map into the World,” written by Kao Kalia Yang and illustrated by Seo Kim, quietly tracks a year in the life of a Hmong American girl observing changes at home and in her neighborhood; “Pokko and the Drum,” written and illustrated by Matthew Forsythe, uses sublime pacing to capture the mounting exuberance and rising volume triggered when frog parents gift their daughter with a drum; “Saturday,” written and illustrated by Oge Mora, celebrates the resilience of a mother and daughter who support each other through disappointments and confirm that time spent together ultimately defines the day’s success; and “Truman,” written by Jean Reidy and illustrated by Lucy Ruth Cummins, which chronicles the herculean efforts of a small tortoise determined to be reunited with his beloved human.

Established in 1998, the Charlotte Zolotow Award honors the work of Charlotte Zolotow, a distinguished children’s book editor for 38 years with Harper Juinior Books, and author of more than 70 pictures books, including such classic works as ‘Mr. Rabbit and the Lovely Present’ and ‘William’s Doll.’ Zolotow attended the University of Wisconsin on a scholarship from 1933 to 1936, where she studied with Professor Helen C. White. She died in November, 2013, at the age of 98. The award is given annually for outstanding writing in a picture book for children in the birth-through-7 age range published in the United States in the preceding year. The 2020 award will be given at an award ceremony in Madison at a date to be determined.

The CCBC is a noncirculating library for adults with a professional, career, or academic interest in children’s and young adult literature. The Friends of the CCBC, Inc., cosponsors of the award event, is a nonprofit organization offering lectures, book sales, and other benefits for members, in addition to supporting the work the CCBC.