Knudson elected fellow of the National Academy of Kinesiology

UW–Madison alumnus Duane Knudson, a professor in the Department of Health and Human Performance at Texas State University, was elected as a fellow of the National Academy of Kinesiology and was inducted at the academy’s annual meeting in Bellevue, Washington, on Sept. 14.

Knudson earned his Ph.D. from the School of Education’s Department of Kinesiology in 1988. Election to the academy is one of the highest honors a scholar in kinesiology can receive. The academy is an honorary organization composed of fellows who have made significant and sustained contributions to the discipline for an extended period, usually with one or more signature contributions.

Knudson, who has also held tenured positions at Baylor University and California State University- Chico, has received over 20 internal and external grants for his research on the biomechanics of sport and exercise, and has authored more than 100 peer- reviewed articles for influential biomechanics and kinesiology journals.

UW–Madison alumnus Robert Lurie received the 2019 National Teacher of the Year award from the Anne Frank Center for Mutual Respect. He was recognized on June 17 in New York City during the Spirit of Anne Frank Awards ceremony.

Lurie is a social studies teacher at Waverly High School in Lansing, Michigan, where he introduces his students to a wide diversity of faiths and cultures, fostering opportunities for direct engagement with immigrants from a variety of backgrounds and survivors of genocide. His students are connected to educational and humanitarian causes throughout the world, including India, Nicaragua, Rwanda, and Europe.

He also serves as the director of an international professional learning community at Michigan State University, creating a podcast on “Educating Newcomers” as a guide to welcome international students and refugees, and to gain a more practical understanding of the opportunities and challenges they bring.

Lurie earned his bachelor’s degree in social studies education from UW–Madison’s School of Education in 1982.

Joseph earned her Ph.D. from the School of Education’s Department of Curriculum and Instruction in 1998 and had also previously served as dean of the College of Education at Eastern Michigan University.

Georgia Gwinnett College is a public institution that enrolls more than 12,000 students, with African Ameri- cans making up nearly one-third of the student body.

“I feel like I belong at GGC and my experience and leadership skills are a perfect fit,” Joseph said in a news release. “I look forward to getting to know the campus and community as we work together to help our students on the path to lifelong learning.”

She also holds a bachelor’s degree in agriculture and a master’s degree in plant science, both from the University of the West Indies in St. Augustine, Trinidad, and Tobago. 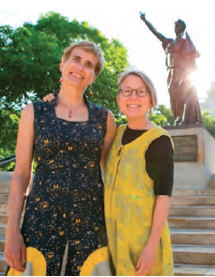 UW–Madison alumnae Brenda Baker and Bird Ross have created one of the largest art prizes in the country for female visual artists.

Baker earned her master of fine arts degree from the School of Education’s Art Department in 1990, and Ross received her MFA in 1992. Together, they established the Women Artists Forward Fund, which was launched to support female artists in Wisconsin.

The two initially created “Being Forward,” a social justice exhibition that includes more than 150 photographs featuring Madison women artists and art supporters posing as Ms. Forward, the iconic statue that has been on the Capitol grounds since her installation in 1895.

From there, the two raised nearly half-a-million dollars and on Nov. 8, two $10,000 Forward Art Prizes were awarded to female visual artists.

Ross and Baker created “Being Forward” and its spin- offs, the Women Artists Forward Fund and the Forward Art Prize, after they unearthed the story of Jean Pond Miner, the 28-year-old Wisconsin artist who sculpted “Forward” at the 1893 Columbian Exposition. “Forward” stands prominently at the foot of the State Capitol, and remains one of the only existing outdoor sculptures of a woman in the country that was created by a woman, and that was funded almost entirely by women before the turn of the 19th century.