UW–Madison alumna Julie Jackson is the author of a new book, “The Spectacular Theatre of Frank Joseph Galati: Reshaping American Theatre in Chicago, Illinois,” published by Bloomsbury in July 2022. 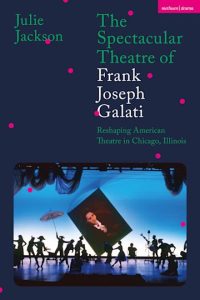 Jackson, who earned her PhD from the School of Education’s Department of Theatre and Drama in 2003, says the book began with research for her dissertation. At the time, she says, she taught at Columbia College in Chicago and worked with Frank Galati as a professional costume designer in the city’s off-Loop theaters. Jackson has also chaired theater programs at Marshall University and Indiana University Northwest.

The publisher’s description of the book reads:

As a director, author, actor, and educator, Frank Galati has been a prominent American artist since the 1980s and continues to create new and innovative work for the theatre. The focus of this book is the remarkable Chicago years, between 1969 and 1996, in which Galati’s values and commitments were embraced and enhanced by the new theatre that emerged in his home town — a style he helped shape even as he was shaped by it. By 1990, the city was widely perceived as ground zero for the next generation of significant innovation in American theatre. There were a great many iterations of the Chicago style in those years, but Frank Galati’s theatrical inclinations, ensemble strategies, and brilliant showmanship touched them all. As this study explores, his reach extended well beyond the professional stage.

Featuring exclusive interviews with Galati, selections from his unpublished notes and speeches, the observations of colleagues on his rehearsal process, and in-depth case studies of productions written, conceived, and directed by Galati — including “The Grapes of Wrath” (1988–90), “The Winter’s Tale” (1990), and “The Glass Menagerie” (1994) — this work offers theatre historians, patrons, scholars, and students a unique source of primary information about a pivotal figure in a significant era of American theatre.