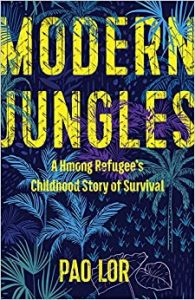 Lor earned his doctorate from the School of Education’s Department of Educational Leadership and Policy Analysis, and currently holds the Patricia Wood Baer Professorship in Education at UW–Green Bay.

“Modern Jungles” chronicles the first 14 years of Lor’s life, when he fled along with his family from their home in Laos to refugee camps in Thailand, before eventually making their way to the U.S. There, Lor “found himself navigating a frightening and unfamiliar world, adjusting to a string of new schools and living situations while struggling to fulfill the hopes his parents had once held for his future.”

The book is described as an “inspiring coming-of-age tale about perseverance, grit, and hope.”

In an article for Spectrum News in Milwaukee, Lor said he wanted to share insight into the Hmong American experience, one shared by nearly 50,000 people in Wisconsin, and capture some of the powerful memories from his youth.