UW–Madison alumnus Ian Chalgren designed the recently released book, “Let’s Talk About It,” which showcases the art painted on Madison’s State Street storefronts after the George Floyd protests during the summer of 2020.

The book features a collection of photographs of more than 100 murals — along with the artists’ own words about their work. The project, which began through a community effort to preserve the murals, was taken on by a team at American Family Insurance.

“We originally printed 10,000 books but the demand was so high, we printed another 5,000,” says Chalgren, the art director and designer at American Family Insurance who received his bachelor of fine arts from the School of Education’s Art Department in 1996. “All of the books were gone within a week. We were blown away.”

More than 10 UW–Madison Art Department alumni are featured in the book, sharing thoughts on their mural, raw emotions, and stories of the racism and bias they have endured their entire lives. 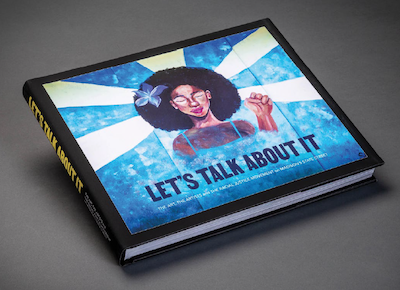 “I just want people to keep in mind that these are people’s sons, daughters, children, and they shouldn’t have to have all of the worries that they do,” Synovia Knox, a featured artist and 2020 Art Department alumna, wrote in the book. “You shouldn’t have to worry about where you go, or how people might perceive you when you get there.”

“I don’t know what to do, so I paint because I don’t have the answers,” Comfort Wasikhongo, who earned her bachelor of fine arts in 2013, wrote in the book. “I’m sick of people reflecting on the old Madison. There is a new Madi- son, and it shouldn’t be ignored.”

The team at American Family Insurance considered other mediums for the project, such as a website or documentary, but ultimately decided to preserve the art in a coffee table book that would be given freely to the public.

“Having a nice, heavy book in your hands creates an experience,” says Chalgren. “It’s something folks could keep forever instead of flipping open their iPad or turning on their TV and being distracted 30 seconds later.”

Chalgren said being a UW–Madison alumnus helped with the project, because he was aware of some of the artists, such as fellow alumnus Anwar Floyd-Pruitt. Due to his experience at the university, Chalgren says he felt a sense of pride and positive pressure while creating the book.

“I knew I had to do this right, because this project meant a lot to so many people,” said Chalgren. “The feed- back has been overwhelmingly positive.”