Jon Spike, a 2010 graduate of the UW–Madison School of Education, has created an educational board game called Gamestormers. 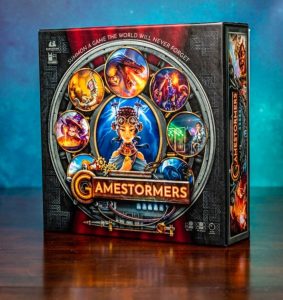 The family-friendly game, which features a character inspired by Spike’s daughter (Sloane the Summoner), allows players to create their own game using cards they are given — as well as ones they create themselves.

Players select various storyline cards, mechanic cards, and item cards, along with a hero character, to create their game. At the end of the game, players pitch their final invention to the rest of the group and vote on who’s game is best. Players can also use strategy to earn victory points and win in an alternative way.

Spike states: “I had this idea that, what if there was a game that made everybody a gamemaker?”

While Spike currently works in educational technology at UW–Whitewater, this “passion project,” as he calls it, is inspired in part by his time at UW–Madison, where he earned an undergraduate degree in secondary education from the Department of Curriculum and Instruction, with a focus on English.

“My time at UW–Madison was heavily influenced by game-based learning and playful learning,” Spike says. “I always wanted to make it easier for students and teachers to design games.”

Spike mentions a specific course he took during his time at UW in which he learned how to use games to teach in a fun, engrossing way.

When asked what he is most proud of in the development of Gamestormers, Spike says that the effort he and his team put into creating a game of equity and representation was vital. He hopes that everyone, no matter who they are, can see themselves in the characters of Gamestormers.

Spike’s hope is that he will soon see Gamestormers in classrooms and libraries across schools, and see the influence it has on childrens’ ability to think creatively and design something they are proud of.