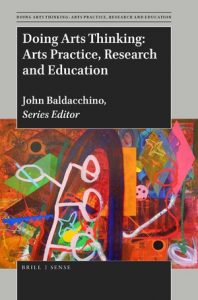 Baldacchino is a professor in the School of Education’s Art Department.

Volume 7 of the series, “Art – Ethics – Education,” was released in Aug. 2020, and includes a chapter from Baldacchino that is titled, “A ‘MOST AMIABLE UNION,’” examining the ethics of art’s relationship with education.

Volume 8 of the series, “Imagining Dewey: Artful Works and Dialogue about ‘Art as Experience,’” was released in Nov. 2020 and includes a chapter from Baldacchino that is titled, “Art Is (Not) Experience: Engaging Dewey in Reverse.”

Currently consisting of eight volumes, the series “Doing Arts Thinking” aims to capture and reassert the wider possibilities that we give ourselves by doing the arts. It explores how the arts and education can only converge through paradox, where what we seek by doing arts thinking remains an open work and in continuous inauguration.

Baldacchino said the series was founded “with the specific intent of opening new avenues for publications on the creative arts and their role in research and in education.”

He noted the series fills a significant gap. This gap, he said, “has to do both with the subject matter itself but also with how methodologies that are based within arts practice often fall between the ‘two stools’ of publishing, within the social sciences on one hand, and the arts and humanities on the other.”

“The success of this series is found in how, while rigorously peer-reviewed, these books offer a unique convergence between the creative arts, education, and the philosophical horizons therein,” he said.

Learn more about the series on the Brill Publishing website, here